A Royal Proclamation at Spink 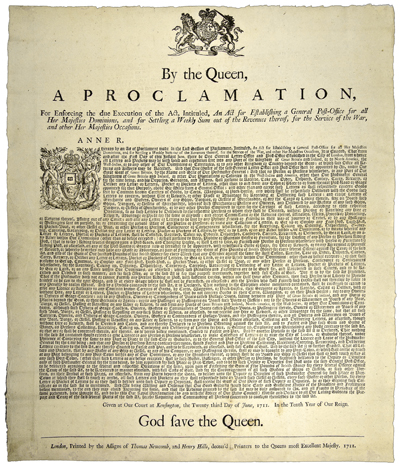 Above: A rare Queen Anne broadside proclamation with Royal Coat of Arms at head. Notification of, by an act of the British Parliament, the establishment of a foreign section of the British Post Office. It is the only example in private hands. Estimated to fetch US$20,000

A 1711 proclamation by Her Majesty Queen Anne (1665 -1714) that saw an act of parliament implement the first ever general post office system in Great Britain is to be offered for sale in Spink's Collector's Series sale in New York on 15/16 August 2013.

This act of Parliament, and the important document stating it, revolutionised communications not just in Great Britain but also further afield, between the UK and the British dominions and territories. This new post office act was highly important as it introduced standard rates for the calculation of postage in the British Isles, as well as setting out the rates to be charged in the colonies. With only minor changes, the principal structure of these rates remained unchanged until the reforms of 1837.

'That from and after the first day of this instant June, there will be one general letter-office and post office established in the city of London, from whence all letters and packets may be with speed and expedition sent to any part of the kingdom of Great Britain and Ireland, or to North America, the West Indies, or to and other of our dominions or territories, or to any other kingdom or country beyond the seas, at which said office all returns and answers may be received.' 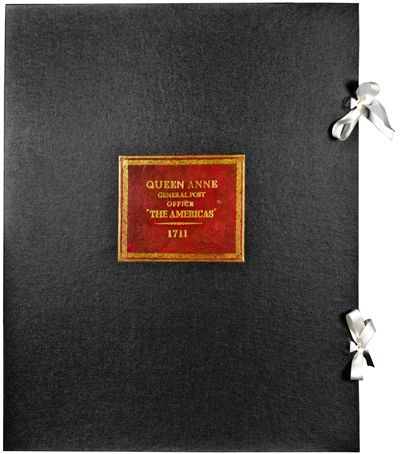 This act also stated that the post office had to pay £700 each week into the Exchequer, to 'carry on and finish the present war'. These payments continued for many decades after the death of Queen Anne.

The document is of huge historical importance, as it is the only example in private hands. It is also in exceptional condition, so should attract bidding from around the former British Empire. It is estimated to fetch US$20,000.

Spink specialist Neill Granger said: "This is one of the most important documents dealing with the complete overhaul of the post office and postal services. It is as significant as the famous reforms made by Rowland Hill in 1840.

"Here is a fantastic opportunity to obtain a genuine piece of history, not just purely philatelic history, but of British history. The war of the Spanish succession lasted for virtually all of Queen Anne's reign, explaining the demand for additional funds from the post office. This beautiful document is in a very fine state of preservation and is an absolute gem of museum quality."