This coin is unusual firstly because of its weight, double that of a normal pagoda orvarahacoin, and secondly on account of its obverse image. Krishnadevaraya identified strongly with the Vaishnava deity Krishna, and went to some lengths to promote himself as the representative of this god on earth, as his name might imply (translated as 'Krishna god king'). All his gold currency coins bore the image of Balakrishna (Krishna as a baby), and his 'liberation' of a statue of this deity from the Gajapati dynasty at Udayagiri, was marked by the building of a huge dedicated temple to house it at his capital.

Yet this coin bears an image of Vishnu as Venkateshwara standing under an arch. The form his image takes immediately identifies it as the icon of the Vaishnavite temple at Tirupati, renowned as one of the most important, and certainly the most wealthy, in South India.  The donations that Krishnadevaraya made in the course of his seven visits to this temple are inscribed into the wall in stone. The most pertinent is that of July 1514, when he and his two queens, Tirumala Devi and Chinna Devi , made a detour to Tirupati specifically to give thanks to Venkateshwara after his conquest of Udayagiri. This occasion was marked by aKanakabhishekam(shower of gold) ceremony where this deity was endowed with 30,000 gold coins. It is thought likely that this coin might have been struck especially as a donative issue for this single occasion.  Certainly the few known examples of this type exhibit almost no signs of wear, as if they had never circulated.

One might wonder how these coins ever left the temple treasuries. However, it is well known that in later, more turbulent, times the temple at Tirupati was hotly contested as ownership gave rights over the renowned treasury, and there is evidence that its riches were often plundered to fund military campaigns in the late 17th and 18th centuries.  The content of the treasury has been investigated only recently, and it was discovered that barely any of the original magnificent objects donated by Krishnadevaraya remain.

Jahangir established his court at an imperial camp at Ajmir for his campaign against the Rana of Mewar in 1613 and remained there until 1616. It was home to the mausoleum of the Muslim saint Khwaja Mu'in ud-din Chishti, who, before his death, was said to have interceded on behalf of Akbar to give him a son. As this son was Jahangir himself Ajmir already held a special significance for him, which was only increased when he was cured of an illness after a visit to the shrine. Wearing a pearl embedded in the earlobe was a sign of devotion to this saint, and Jahangir decided that he and his courtiers would start wearing pearls in his honour.

Sir Thomas Roe, envoy of the East India Company paid court to him here during his sojourn at Ajmir,  as did a man who informed him that, under the Abjad system, where each letter of the Arabic alphabet stands for a number, the letters of his name and that of Allahu Akbar added up to the same number. Whitehead conjectures (Numismatic Chronicle, 1928-29, p.24) that these two events prompted the striking of this coin and the otherwise recondite couplet on the reverse.  He further suggests that the word 'Mu'in' inserted above the regnal year is also in honour of Mu'in ud-din Chishti.

This very rare piece is one of the last of the series of portrait coins struck by Jahangir. It is likely that their appearance was prompted more by an appreciation of figurative art than in rebellion against strict Muslim edicts against it. It appears to be the same coin sold at Spink auction 102, 2nd March 1994, lot 509.

During the first month of Jahangir's 13th regnal year he wrote ' previous to this, the rule of coinage was that on one face of the metal they stamped my name, and on the reverse the name of the place, and the month and year of the reign. At this time it entered my mind that in place of the month they should substitute the figure of the constellation which belonged to that month; for instance, in the month of Farwardin the figure of a ram, and in Ardibihisht the figure of a bull…..' The idea for the zodiac coins was thus clearly that of Jahangir alone, although his father, Akbar was responsible for the introduction of the Ilahi dating system which counted in solar years, and first utilised the Persian names for the twelve months on coins.

Agra is by far the most common mint for these coins, where they are known in regnal years from 13 to 19. The scorpion is found facing both right and left on these coins, and is rare in this condtion. 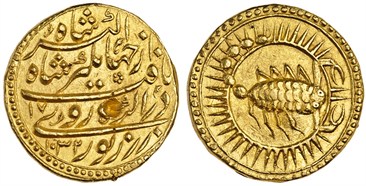