Envelope Addressed to First Commander of the Future South Africa: Jan Van Riebeeck to Go Under the Hammer at Spink

ENVELOPE ADDRESSED TO FIRST COMMANDER OF THE FUTURE SOUTH AFRICA: JAN VAN RIEBEECK TO GO UNDER THE HAMMER AT SPINK 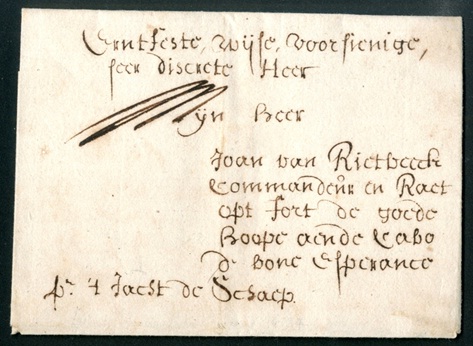 LONDON. February 12, 2013. Spink & Son Ltdare pleased to offer a spectacular testament to the vibrant history of South Africa. An envelope addressed to the founder of the settlement at the Cape of Good Hope in 1652: Jan Van Riebeeck, First Commander of Council at the Cape from 1652-1662, is to be offered at auction. Estimated to fetch between £4,000-5,000 it will go under the hammer in The Award-Winning Medina Collection of Cape of Good Hope onMarch 20, 2013.

Jan Van Riebeeck was founder of what we now know as Capetown. He served with the Dutch East India Company from 1639 and in 1651 he volunteered to take command of the first Dutch settlement at the Cape, after it was thought vital to have a way-station providing provisions for vessels travelling between the Netherlands and the East Indies. During his time there Van Riebeeck established a fort namedFort de GoedeHoop, built out of mud, wood and clay. He also established agriculture, acquiring livestock and planting fruit, vegetables and cereals, which would have an enduring effect on the economy and society of the region.

The regard and historical and cultural significance to South Africa that Jan Van Riebeeck had, is evident in the stamps and currency used in the region from 1940, right up until 1993. There was also a 'Van Riebeeck day' until 1994, when it was abolished by the ANC government. Statues exist of Van Riebeeck and his wife in Capetown and the coat of arms of the city is based on the Van Riebeeck family coat of arms. There are many streets and villages also named after him in the Capetown area.

The cover is just one of the many extraordinary rarities to be sold at auction from the important Medina Collections, which are being offered in a series of sales in London during 2013. The Medina Collections were formed by private collector Mohammed Sayeed, FRPSL, over the course of many years and are wide-ranging in content. They include stamps from India and States, Ceylon, Cape of Good Hope, Afghanistan and Great Britain. Highly prestigious, they have won numerous gold and large gold medals at International exhibitions over the years. In 2008, in Bucharest, The Scinde Dawk and Lithograph Issues and their Usages display was awarded the FIP Grand Prix D'Honour, one of the highest awards achievable.

David Parsons, Spink's specialist in charge of the sale, said "Spink are thrilled to have been chosen to auction the award-winning Medina collections. Many collectors worldwide, have waited many years for these fine collections to come onto the market, therefore we anticipate huge interest. This particular item demonstrates the diversity and importance of the collection"