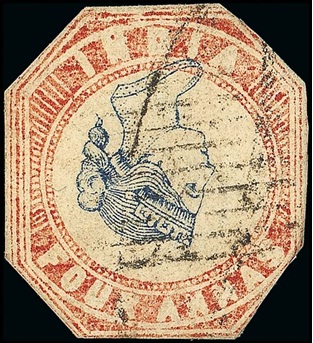 LONDON. 23th January, 2013. TodaySpink & Son Ltdsold one of the most legendary philatelic rarities in the world for £69,600 way above its pre-sale low estimate of £50,000.The 1854 Inverted Head Four Annas of Indiais a postage stamp cherished and highly sought-after by stamp collectors around the globe and thee was much competition in the room and on the telephones from bidders in the UK and abroad.

The famous 1854 issues of India were lithographed in Calcutta at the offices of the Surveyor-General. During the first printing of the 4anna value a major error occurred, resulting in the head being printed upside down. The example in today's sale was completely free of the faults associated with many of these stamps and in immaculate condition, making it even more significant. It was also one of the world's first multi-coloured stamps and therefore holds its place firmly in the history of philately.

David Parsons, Spink's specialist in charge of the sale, said "We are delighted with the result achieved for this exceptional stamp. As one of the most important pieces of 19th century Philately, the price achieved and competitive bidding in the room and on the telephones, was more than justified. I hope that the new owner keeps it in as pristine a condition as it came to us."

The stamp, which was purchased by an overseas private collector, was just one of the rare stamps to be sold at auction from the important Medina Collections, which are being offered in a series of sales in London during 2013. As well as thisAward Winning Medina Collection of India, Part 1,sale,was theMedina Collection of Ceylon Pence Issues,which also attracted much interest.

The Medina Collections were formed by private collector Mohammed Sayeed, FRPSL, over the course of many years and are very diverse in content. They include stamps from India and States, Ceylon, Cape of Good Hope, Afghanistan and Great Britain. Highly prestigious, they have won numerous gold and large gold medals at International exhibitions over the years. In 2008, in Bucharest, The Scinde Dawk and Lithograph Issues and their Usages display was awarded the FIP Grand Prix D'Honour, one of the highest awards achievable.