A collection of Durrani Mohurs, property of an Indian Prince

A collection of Durrani Mohurs, property of an Indian Prince

On December 5th Spink is to auction the most extensive collection of Durrani gold Mohurs ever offered. The Durrani dynasty was to Afghanistan what the Mughals were to India, uniting the Pashtun tribes for a generation; long enough to mould Afghanistan into the form it takes today. The coins themselves speak of the extent of the empire, with mints as far flung as Shahjahanabad (Delhi) in the east and the holy city of Mashhad, now situated in Iran to the west. They date from the first year of Ahmad Shah's rule in 1748 to the reign of his grandson, Shah Shujah in the early 19th century.

The dynasty's founder, Ahmad Shah, was born into the Sadozai family of the Abdali tribe of Pashtuns. He first served as a military commander under the infamous Afsharid ruler Nadir Shah on various campaigns. While probably not present when he seized the Peacock Throne from the Mughals in 1739, he gained skills in both warfare and the administration of a great empire, and was on hand when Nadir was killed by his Persian generals. This proved a pivotal point in his career as he took the opportunity to seize much of Nadir's portable wealth, including the famedKoh-i-Noordiamond and flee with it to Qandahar at the head of the army's Pashtun contingent. A fortuitous encounter with a treasure convoy destined for Nadir's camp ensured he reached Qandahar with both tribal support and wealth enough for him to be formally crowned as Shah in July 1747, accepting the titleDurr-i-Durrani(pearl of pearls). Qandahar was renamed Ahmadshahi in his honour, and became the capital, bearing the epithetAshraf al-Bilad(most noble of cities).  The Abdali tribe, from which he sprang, were henceforth styled the Durranis.

The time was ripe for Ahmad to launch an exhaustive series of campaigns that capitalised on the demise of the Safavids, the disruption in the Mughal Empire and the sudden collapse of Afsharid power. His empire expanded rapidly, at its height being bounded by Delhi to the east, the Amu Darya (Oxus River) to the north, Persian Khorasan in the west and the Arabian Sea to the south. It included the Indus valley and much of Kashmir.  He struck coins at mints situated in every part of his kingdom, but at some the issues were sporadic and linked to his arrival on campaign. The coins themselves were modelled on those of the Safavid and Mughal dynasties; the mint name being written on the reverse, often with a descriptive epithet, and a rhyming couplet appearing inNastaliqscript on the obverse. Ahmad's standard couplet is found on all his issues in this collection:

"Command came from God, the inscrutable, to Ahmad the King,

Although it is believed that coins were struck at Qandahar in the first year of his reign, the earliest extant coins appear to have been issued at Lahore in 1748 (AH1161) after the flight of the Mughal governor, Shah Nawaz Khan, and Ahmad's entry to this city in January.  Lahore was later given to Ahmad's son and successor, Taimur, to govern, so we also find coins in Taimur's name struck at this mint from AH1170 (1756) (lots 534 & 535). Kabul, which became the capital in 1772, also struck Durrani coins from 1748 (lot 512). Other mints were to be found at Herat, the original homeland of the Abdali dynasty, Peshawar, their winter capital on the plains, while the Indus valley had mints at Multan and Attock until overrun by the Sikhs.

Ahmad led no less than eight campaigns to India during which Shahjahanabad was occupied twice. In 1757 a daughter of Alamgir II was given to Taimur in marriage, and the search for hidden treasure was so frenetic that excavations took place under thehavelisof prominent officials.  He was in the area again in AH1173 (spring of 1760) and AH1174 (1761) before and after defeating the Marathas at the battle of Panipat. On both occasions Ahmad Shah reinstated the Mughal emperor, seeming happy to depart with plunder and the glory of bringing the great Mughals into submission. However he marked both occasions with an issue of coins (lots 525 - 528), the most remarkable being the Nazaranas struck in 1760 and 1761 (lot 526).

Although an agreement was signed with Shah Rukh in 1751 at Mashhad giving Ahmad Shah the right to strike coins in his own name, issues of this mint are only known for 1754/5 (lots 532 & 533). There are also a couple of mints striking Durrani coins to be found in present day Uttar Pradesh. Ahmadnagar-Farrukhabadwas ruled by an ally of Ahmad Shah, Nawab Ahmad Khan Bangash. After fighting side by side at Panipat, the Nawab struck coins in the name of Ahmad Shah (lot 504). The Rohilla chief, Nawab Najib-ud-Daula, also formed an alliance with Ahmad Shah during his latter campaigns in the Punjab, hence the single-year issue of Najibabad, AH1180 (1767) (lot 520). Sarhind was in the hands of Ahmad on several occasions. Initially he occupied the fort on his first Indian campaign in March 1748 and later the area was endowed to him by Alamgir II as part of the marriage alliance of 1757. In 1767 the Shah granted the government of Sarhind to Amar Singh of Patiala who struck coins the name of his overlord. In fact, Ahmad Shah's name and couplet appear on coins of Patiala, Jind and Maler Kotla right into the 20th century.

By far the most unusual and rare mint was that used on campaign.  Rikab or Rikab-i-Mubarak literally means "the august stirrup" implying that the coins were struck very much on the move at a camp mint. One issue is known for Ahmad Shah, dated the first day of AH1173.  This collection is fortunate to have an issue of Shah Shuja (lot 607) as yet uncatalogued.

Ahmad died in 1772 leaving four sons:Sulaiman, Taimur, Sikandar and Parwez.Taimur had been chosen to succeed, but as Sulaiman was both the eldest and the son-in-law of the prime-minister, Shah Wali Khan, there was an attempt to enthrone him. This resulted in the single-year issue of coinage represented by lot 536. Taimur Shah put down this rebellion and moved his capital to Kabul. He did not attempt to expand the empire and withdrew as much power as possible from his kinsmen the Sadozais and the other Durrani chiefs who he mistrusted. Although some marginal territories were lost, this was a prosperous time, as the many issues of Kabul, Herat, Peshawar and Qandahar attest. The couplet used on his coins was:

By command of God and of the Prophet of Mankind" 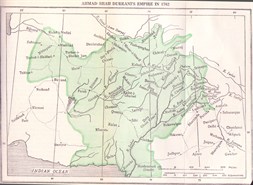 Unfortunately when Taimur Shah died in 1793 he gave no instructions as to who of his many sons should succeed him.  Humayun was the eldest and he struck coins at Qandahar in 1793 which are extremely rare (lot 581). The fifth son Shah Zaman appears to have had a larger following as he succeeded in ruling for seven years between 1793 and 1801. However battles between the brothers continued throughout his reign. When he tried to retake Sindh his brother Mahmud, then governor of Herat, aided a Persian revolt in Khorasan which diverted his troops away.  Mahmud finally defeated and blinded Shah Zaman in 1800. However he himself was defeated and imprisoned by another brother, Shah Shuja in 1803. In 1809 Mahmud seized power again, exiling Shuja to India, from where he returned in 1839 to rule briefly until 1842. The constant battling between the princes of this line and that of a rival Durrani tribe, the Barakzais, was to continue throughout the 19th century, but the latest coin in this collection is dated AH1223 (1808) when the Durranis were still at their height.