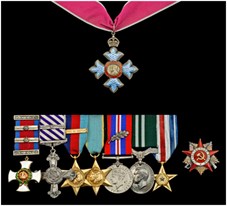 London. 22nd August 2012. The outstanding collection of medals and memorabilia relating to Group Captain John 'Cat's Eyes' Cunningham, the highest-scoring night fighter ace of the Second World War and pioneering chief test pilot for de Havilland during the jet age, will be offered for sale at Spink on the 6th September 2012 as part of the Bentley Priory Battle of Britain Trust Appeal Charity Auction.

Cunningham's Honours and Awards include the C.B.E. (Commander of the Order of the British Empire); the D.S.O. (Distinguished Service Order) with 2 Bars; the D.F.C. (Distinguished Flying Cross) with Bar; the 1939-1945 Star, with Battle of Britain Bar; the Air Crew Europe Star; the War Medal, with Mentioned in Despatches oak leaf; the Air Efficiency Award; the American Silver Star; and the Soviet Order of the Patriotic War First Class, and are offered with a large related archive including the recipient's Flying Log Books and various trophies, uniforms, and aviation memorabilia. The lot is estimated at £140,000-180,000, and is one of many important flying groups included in the auction.

Cunningham first came to prominence in the night skies over London during the 1940 Blitz, where he quickly achieved a number of victories and gained national recognition with the British public. Paraded as a hero by the Royal Air Force, he was given the nick-name 'Cat's Eyes'- for the benefit of propaganda his uncannily clear eyesight at night was attributed to the carrots that he ate, when in reality it was due to the top-secret A.I. Radar system.

The vendor's proceeds from the sale of this lot will be put towards flying scholarships for young people, an entirely appropriate move that ensures the legacy of such men is passed onto the next generation and the entire sales commission from this auction will be donated by Spink to the Bentley Priory Battle of Britain Trust appeal.

Bentley Priory served as the Headquarters of Fighter Command during the Battle of Britain. It was from here that Air Chief Marshal Sir Hugh Dowding controlled and directed the Battle between 10th July 1939 & 31st October 1940. It is a battle in which Cunningham excelled and in which the courage of all those who participated was pivotal, as its success averted a German invasion and led the way for European liberation.

As the house was declared surplus by the Ministry of Defence, an opportunity arose to tell its unique and important story for future generations. The role of preserving this architecturally significant building that played such a significant role in national social and international military history was taken on by The Bentley Priory Battle of Britain Trust.  The Trust was created by the Battle of Britain Fighter Association, whose members are made up of the survivors of 'The Few' aircrew that fought in the Battle of Britain. 'The Few' consider Bentley Priory their spiritual home.

After seven years of hard work and negotiation the Trust has secured £11.6 million out of the total project costs of £13.4 million required to secure the long term future of the Priory and to create a sustainable museum and learning centre that will benefit a broad audience. The final hurdle is to raise £1.2 million to fit out the museum.  A bid for a Heritage Grant of £650 000 has been made to the Heritage Lottery Fund who have already generously awarded £45K towards the development work for the museum.

The museum and learning centre will offer a state of the art programme about the significance of the Battle of Britain and provide information on citizenship and above all, history. The lots in this special charity auction, donated by the families of those that have fallen, or were honoured for outstanding bravery in action, and have since died, will make a significant contribution to this worthy cause. The Trust is very grateful to Spink for their generous support.