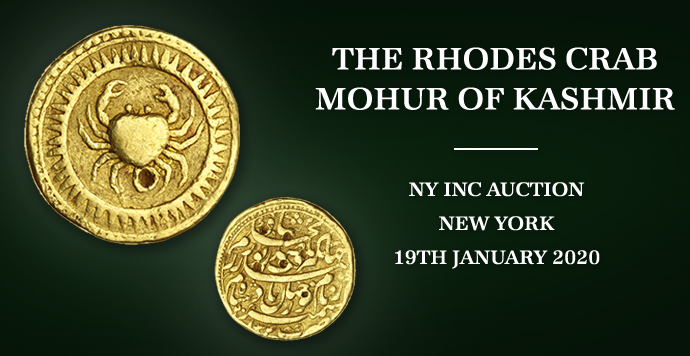 Two rare gold coins of the Mughal Emperor Jahangir are on offer at the NY INC coin fair, at the Grand Hyatt Hotel on 19th January. Lot 264 is a Mohur depicting an image of Taurus the Bull, struck at Agra mint (estimate $80,000-100,000). This is an extremely rare and desirable coin made at the Mughal capital. However, the Mohur featuring Cancer the Crab, offered at lot 265 is far rarer, as it was struck at Kashmir mint (estimate $300,000-400,000).
Kashmir was the resort of Emperors during the hot season and was a particularly favourite of Jahangir and his most famous wife, Nur Jahan. Very few coins were made there, and this is the only gold zodiac issue know. Produced in the 20th year of his reign (1624), during a long sojourn, it is particularly interesting as its legend states it was struck ‘in the name of the empress Nur Jahan.’
For collectors of Mughal coins it is perhaps the only chance they will have of acquiring a Zodiac Mohur of this mint. Coming with a long provenance dating back to 1878 it is sure to be hotly contested. 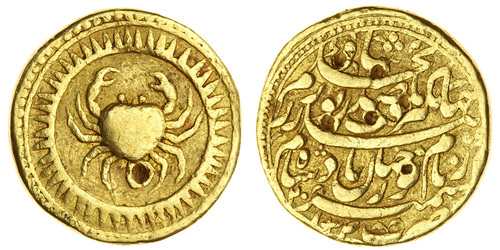