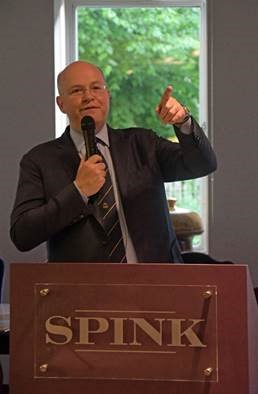 On 8th May 2018 Tomorrow’s Royal, the appeal for funds to refurbish our new building at 15 Abchurch Lane, was launched at a splendid reception hosted by Spink and Son Ltd at their auction gallery in London. Click here to read more about this reception and the fundraising sale.

Spink was honoured to have been appointed by the Royal Philatelic Society London (RPSL) to offer this fine collection, generously donated by Dr. Ramsay to the RPSL to assist with the cost of moving and refurbishing their new offices.

Many very talented artists were represented including over 50 by Hugh Rose. Most of these were from the famous King Harman correspondence. One of the highlights, a fabulous group of covers painted by Rose and addressed to the Prince of Wales went under the hammer for over £29,000.

On the evening we hosted a reception preview followed by an auction of the first nine lots. Patrick Maselis and Peter Cockburn, respectively President and Vice President of the Royal Philatelic Society London, with their charm took control of the rostrum and switched batting with the gavel throughout this first session. The remaining 200 lots were auctioned the next day at Spink London where we saw some intense room and internet bidding.

Overall the auction was a great success both as a "white glove" sale and by achieving more than double the estimated market value. A fantastic result which we hope will benefit the "Tomorrow's Royal" Campaign greatly.