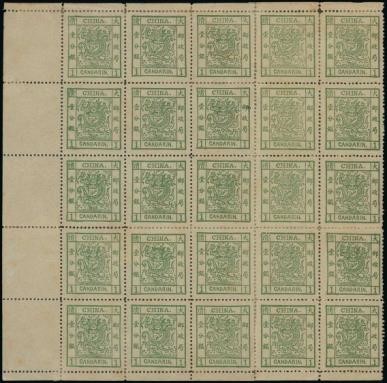 Spink kicks off the New Year 2018 by putting on five solid auctions in its Hong Kong offices and achieves a total of HK$65 million proving that rare items and collectibles are still on trend.

SPINK CHINA | Most of you might remember January 2016, the weekend where Spink had the highest grossing stamp auction (The Mizuhara collection) ever held in Asia which achieved HK$84,000,000, with the combined total in excess of HK$100 million.

It seems that is what is in fashion in Sheung Wan as yet again, just before entering the Chinese New Year, Spink China closes the year with five consecutive auctions in one weekend filling up their auction room where, literally, there was no sitting space left for those who did not turn up on time.

This year Numismatic items from East Asia region starred the event and showed us how HK$1,000 can turn into HK$360,000. Many rarities from this region were offered in the two day sale. Chinese banknotes include a ‘Canton Government Bank’ HK$1 issued in 1916 (sold for HK$360,000, lot 281), an unusual 3 yuan denomination note issued in 1953 (sold for HK$144,000, lot 679) and a 1930 Mercantile Bank of India HK$50 specimen selling for HK$216,000 (lot 405). These three notes represent the wide range of banknotes issued in China before 1960 with the Canton Government Bank representing provincial bank issues, the 3 yuan note representing the early People’s Republic of China and the Mercantile Bank of India representing the presence of foreign banks in China.

These results show that Spink is one of the leading numismatic auction houses in Hong Kong with a formidable client base such that rare and choice items when correctly estimated can fetch staggering prices.

Philately, of course, was no less and the Sinkiang Postal History, The Manhattan Collection proved to be the collection that generated a world-wide interest. The presale estimate of HK$4.3 million was easily exceeded with 99% of the lots selling for a total realisation in excess of HK$20 million. The star items in the auction were the unique cover from the Russian Post Office bearing Russian stamps cancelled in Urumchi which realised HK$660,000 (estimated at HK$400,000, lot 2019), followed by one of the two surviving cover of the Hami Provisional Air Mail exceeding all expectations selling for HK$2,160,000 (estimated at HK$120,000, lot 2366) and topping it up with the unique Khotan Rebellion cover from their own postal service, HK$720,000 (lot 2430).

But that was not it, after an intense and amazing 9 hours marathon to sell 482 lots (only!) due to the heavy bidding, Spink were still not satisfied and moved on into breaking a world record for a sheet of 1 candareen Wide Setting Sheet of Large Dragons that sold for HK$4,387,500 (lot 2567). And finally, late in the evening, highest and largest franked of any first issue large dragon cover 29 stamps sold for HK$3,375,000 (lot 2572) and achieved the last astonishing result of the weekend: the record for a large dragon cover to ever be sold in HK.