SPINK LONDON | Yesterday, many witnessed a wonderful sight in Spink's London auction room; an entirely non-profit auction of the brand new Bank of England notes. The auction began at 5pm and continued till 8pm with a jam-packed room and voracious bidding on the phones and internet.

The auction started with the Chief Cashier of the Bank of England, Victoria Cleland, auctioneering the first lot. The lot was the lowest serial number of the new Bank of England polymer notes, the £5 ND (2016) AA01 000017. Bearing the iconic image of Winston Churchill on the reverse. The lot attracted much attention with an excited flurry of bidding. The first lot of the sale set the tone for the rest of the auction by exceeding its estimate significantly at £4,150. 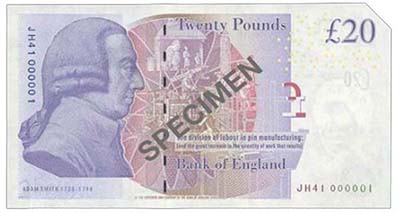 Spink is thrilled with these results and the enthusiasm in the room was palpable, everyone wanted to get their hands on the lowest serial number possible! The auction was a great success, a white glove sale at that, selling every single item for above the estimated price. In total the auction realised £203,820. This money will be divided amongst the three charities chosen by the staff at the Bank of England each of which is dedicated to the support around young children. These are the Myotubular Trust, The Lilly Foundation and Bliss, the UK's leading charity for prematurely born babies.

It was an honour to be involved, and the auctioneer, Barnaby Faull commented; "It is always a very special type of excitement when compassion is combined with a collector's zeal to drive an auction, Spink very much looks forward to the next".