A Fine Collection of Polish Coins and Medals

SPINK LONDON  | On the 15th July 2015, Spink will be holding the summer sale of Ancient, British & Foreign Coins and Commemorative Medals. The auction boasts a wide variety of rarities and highly valuable items, from a Catherine II Russian commemorative platinum medal of her accession, (Lot 237, estimated: £40,000 - 50,000) to a fine collection of Karl Goetz medals. The Collection of Goetz Medals was formed by Walter R Johnson M.D. in the 1960s. We have much of the collector's original correspondence, and buyers may request copies. From Germany to Poland, the sale contains a selection of polish coins and medals of the finest quality. They are from an extensive collection formed by a Polish gentleman living in England after the war and contains some exceptionally beautiful rarities.

Out of the 20 coins in the collection, two stand out in particular. The first being an 8 Ducat piece from Poland showing King Wladyslaw IV, of the House of Vasa (1632-48) struck in 1644 in Gdansk (Danzig). The obverse shows a very clear crowned and armoured half-length figure of the king wearing a falling lace collar, and the Collar and Badge of the order of the Golden Fleece, holding a sceptre in his right hand and an orb in the left. The Collar and Badge of the order of the Golden Fleece represent the close political ties Wladyslaw IV nurtured between Poland and the Habsburgs of Austria. However the order of the Golden Fleece itself has quite interesting and contradicting symbolic implications. The choice of the Golden Fleece of the Ancient Greek kingdom of Colchis as the symbol of a Christian chivalric order is difficult to justify. This issue was rectified by the bishop of Châlons, chancellor of the Order, rescued the fleece's reputation by identifying it instead with the fleece of Gideon that received the dew of Heaven. 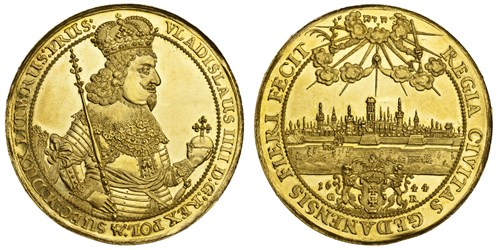 The sale contains another item from the reign of Vladislas IV, a beautiful item that commemorated a woman's political tenacity in a foreign country and hostile government. Lot 215 is a gold medal by Jean Höhn and struck in Gdansk (Danzig) in 1646. The medal commemorates the marriage of King Vladislas IV (1632-48), to Louise Marie Gonzaga in 1646. On the obverse the royal couple can be seen seated, facing and holding hands on a paved terrace wit the king on the left, crowned and holding a sceptre. The reverse shows the name Jehova in Hebrew above a radiant cloud and a crowned eagle which hovers over the arms of Danzig with lion supporters. A superb medal, the enamel fresh and bright and the fine details very beautifully worked, a great rarity. Louise Marie Gonzaga made many sacrifices to become the queen of Poland, she even changed her name to Ludwika Maria, as the name Mary was reserved for the Mother of Christ alone. Despite this personal sacrifice and the pomp and circumstance of the wedding this medal commemorates, the marriage did not last very long - just two years. However, Louis Marie Gonzaga not only outlived her husband, so did her reign. She married his brother John Casimir in 1648. In 1667 Marie Louise died unexpectedly in Warsaw  and was buried in Krakow. John Casimir II, shocked by the sudden death of his wife and in deep grief, abdicated the Polish throne a year later as he was not able to cope with the heavy burden of reigning without her. Her reign outlasted her first husband's, and her second husband's did not last long without her.