Today, 16th October 2014, Spink London broke the world record for a single Australian philatelic item in an auction of Australian Commonwealth from the Vestey Collection; a corner block of the prepared but never issued, Edward VIII 2d. stamps.

Quoted by Spink Specialist, Nick Startup, as "one of the most prized rarities in all Australian Philately", the famed sheet realised a fantastic £240,000.

The legacy of these stamps began in Australia, 1936. The Governor of Victoria, Lord Huntingfield, was invited to the Note and Stamp Printing Branch of the Commonwealth of Australia to witness the first printing of the King Edward VIII issues. As a memento of the occasion, Huntingfield marked a sheet of the freshly printed stamps for identification.

Following the abdication of King Edward, a month later, instructions were sent by the Postmaster-General's Department to not go ahead with the King Edward issue. As a consequence, everything in connection to the issue had to be destroyed, including the sheet given to Lord Huntingfield.

In a letter sent by John Ash, General Manager of the Commonwealth Bank, to Huntingfield requesting the sheet back states; "…We have been in communication with the Postal Authorities and the Chairman of the Bank in the matter, and we find ourselves in the position that we are reluctantly compelled to ask that His Excellency will arrange at his convenience to have the sheet returned to us."

However, by this point, Huntingfield had already removed a block of six stamps from the sheet and sent to England, which he states in his reply "very doubtful if I could obtain possession". 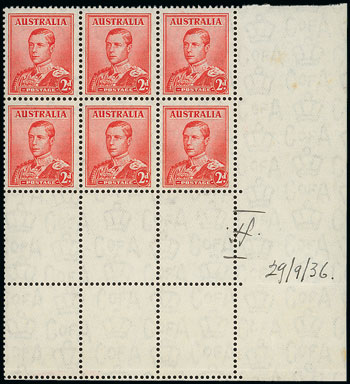 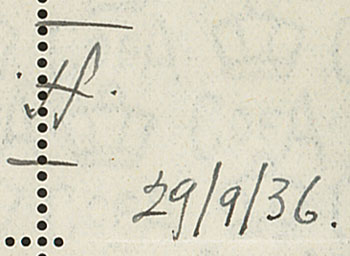 Other highlights of the auction include an extremely rare group of perforated colour trials of the King George 4d. issue (Lot 154, price realised £32,400), and a 2d. die proof commemorating the Centenary of Victoria (Lot 204, price realised £15,600). 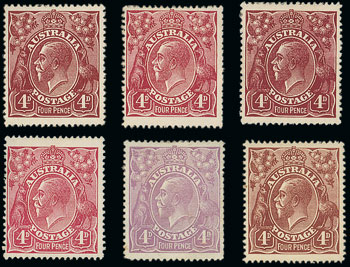 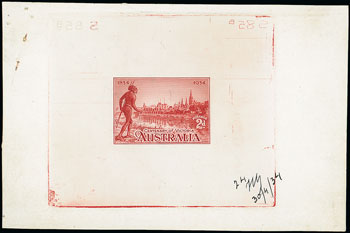 This impressive achievement follows six world records made by Spink previously this week and strengthens Spinks position as the premier global auction house in the collectables market.