On 10th October 2014, Spink China will auction a remarkable collection of Indian Postal Agencies in the Persian Gulf Area assembled over many years by the well-known collector and student of this area; the late Alan Parsons FRPSL.

Spink Specialist, David Parsons comments "Philately was a lifelong and absorbing hobby for Alan and we hope that the collection offered here, and lotted for collectors, will be a fitting tribute to a gentle man."

Comprising over 450 lots the sale commences with the Postal Agencies of Bahrain, Dubai, Guadur, Kuwait and Muscat.

Amongst this section is what is believed to be the sole item of registered mail from the Field Force campaign of the Anglo-Persian War (Lot 2022). Dated 1857, the envelope is registered to the Naval Dubash at Bombay and bears a superb "FIELD FORCE/PD/PERSIA" c.d.s. in red and framed "REGISTERED/LETTER NO" handstamp on face with 1854 2a. green neatly cancelled "131" on reverse. Estimated HK$60,000 - HK$72,000. 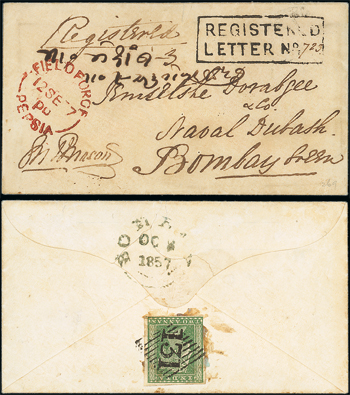 Following this is a large offering of both Iran and Iraq. Featured is a 1917 envelope with a rare combination franking, addressed locally to the Baghdad General Headquarters during the British Occupation of Baghdad (Lot 2390), and estimated HK$18,000 - HK$24,000 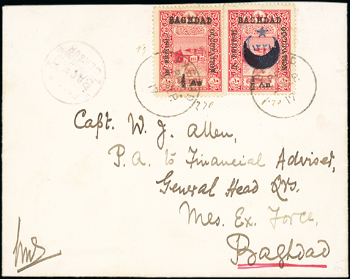 Also featured are fifteen lots of envelopes written by Rev. Alington at Jask, the first missionary on the Mekran Coast, to his brother Rev. Alington at Spilsby, Lincolnshire (Lots 2311 - 2325) 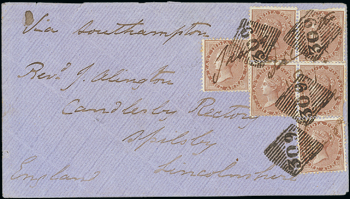