On 25th September 2014, Spink London held an auction of exceptional British philately, specifically selected from the outstanding collection amassed by Lord Vestey and sold by order of the Trustees.

From a choice selection of 258 rarities, items ranged from issues of Queen Victoria through to King Edward VII and King George V. Offering stamps of the upmost rarity and uniqueness, the auction allowed collectors and philatelists the opportunity to own items that rarely come onto the market.

With many lots exceeding estimates, highlights included a very fine example of the very rare and unissued 2d. Tyrian Plum (Lot 35). Due to the death of King Edward, it was decided not to proceed with this issue, so stocks of the 2d. Tyrian Plum were destroyed with only few surviving from the official records. Exceeding its pre-sale estimate, the highly sought-after stamp realised an impressive £67,200. 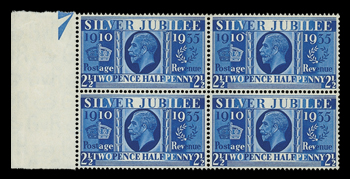 Other notable highlights of the sale included one of the finest mint singles of an 1840 2d. Blue ever to be offered (Lot 3). Printed in in a brilliant, almost electric, blue, the stamp surpassed its estimate to achieve £30,000.

Of similar outstanding quality was an attractive example of the rare Inland Revenue Official £1 issue (Lot 229) which realised £31,200)