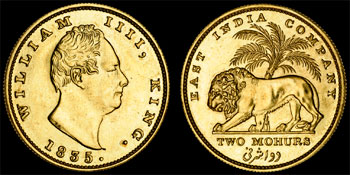 A Gold 2-Mohur Coin of the East India Company, issued in the name of William IV

The 2-Mohur gold coin was one of the first, and certainly the most magnificent, coin issued by the Calcutta mint to bear an effigy of the then British king. Weighing over 23g, and featuring an attractive design it soon became popular as a presentation piece.  So much so, that re-strikes were commissioned right up until 1970, and the original issues, such as this example, are exceedingly scarce.

Although lightly polished in fields, it is in good extremely fine condition

This coin will be offered by Spink at auction in London on 23 September. It is now available for viewing in our London showroom.