Offered is a rare and interesting letter between the Royal families of Iran and Egypt, Princess Fawzia, soon to be Queen of Iran, in correspondence with Queen Farida of Egypt, wife of King Farouk.

The contents of the letter touch upon the "sad incident" that has passed between Iran and Egypt, Fawzia hopes "the bad tongue will stop", alongside habitual conversation about birthdays and the cinema.

An intriguing insight into the relationship between rivalling countries through the eyes of sisters, the letter is estimated £7,000 - £9,000. A noteworthy collection is an archive of 48 previously unseen photographs that document the Visit to Egypt by the Crown Price of Iran, the future Shah Reza Pahlavi, on the occasion of his marriage to Princess Fawzia of Egypt. This unique archive records in an intimate way the dynastic marriage that ended in divorce, estimated £4,000 - £6,000. 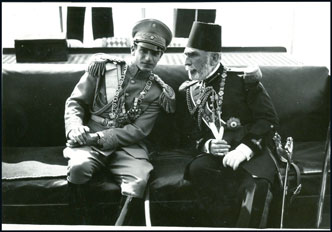 Another noteworthy selection is an unusual group of photographs showing three generations of the Iraqi Royal family. The first, a 1928 photograph of the future King Ghazi whilst in London to his sister as a memento of his visit. Accompanying is a signed portrait of the future King Faisal II (1942) seated below a portrait of his Grandfather, King Faisal. Estimated £1,200 - £1,500.