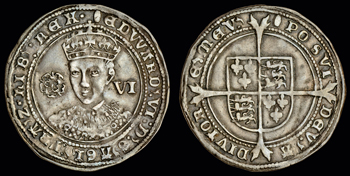 An extremely fine Sixpence of the young king Edward VI, the only son of Henry VIII. To his left is the Tudor rose and to the right the value is given in Roman numerals. The legend on the reverse, from Psalm 54, translates as 'I have made God my helper', an appropriate motto for a boy king ruling England during the most turbulent time of the English Reformation.

The coin will be offered at auction at Spink in London on 25 June.