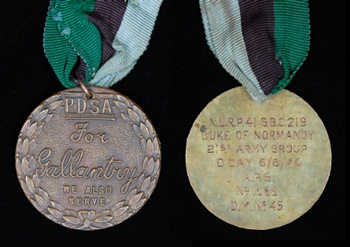 The Dickin Medal is the animal equivalent of the Victoria Cross, awarded for bravery by the PDSA. During World War II the British forces used some 250,000 homing pigeons in a variety of roles, but primarily for sending messages. During the events leading up to and during the D-Day landings pigeons brought back many messages from occupied France on German preparations, defences and fortifications that undoubtably saved many Allied lives.

The Duke of Normandywas one such pigeon. Two other pigeons attained fame on the 6th June -Gustav bringing first news of British initial landings andPaddy reporting the success of the landings.

The Air Ministry maintained a pigeon section throughout the war and a special Pigeon Policy Unit determined roles for the pigeons - from carrying messages to taking photographs with miniature cameras to their potential for dropping small explosive charges and bio weapons. The last country to finally disband its pigeon section was Switzerland in 1996.

The Germans used snipers as well as trained falcons to attempt to stop the carrying of messages from occupied Europe.

The citation from the PDSA regarding theDuke of Normandystates:

"For being the first bird to arrive with a message from Paratroops of the 21st Army Group behind enemy lines on D-Day, 6th June 1944 while serving with the APS (Allied Pigeon Service)."

The Duke was dropped behind enemy lines in June with a group of paratroopers tasked with silencing the powerful Merville Battery, which overlooked Sword Beach. As radio silence was crucial the Duke was carried to take back the message that the battery had been taken. Of over 600 men, who were dropped, only 150 managed to reach the target and after fierce fighting the objective was overcome with heavy loss. The Duke was duly released and after 26 hours and 50 minutes flying landed back at his loft with the news of a successful operation. He was awarded the medal in 1947 during a televised ceremony at the BBC Alexandra Palace.

The Dickin medal has been awarded 64 times; 32 of which were for pigeons.