On June 17th, Spink London will hold a philatelic sale of Rhodesia Arms and Admiral Issues from the Vestey Collection, the first in a series of ten auctions to be sold by order of the trustees over the next eighteen months.

The 342 lot auction opens with a selection of Rhodesia Arms Issues from the late 19th Century. Highlighted items include lot 24, an 1896 unique 4d. horizontal pair on a Cape issue with "COMPANY" omitted.  Estimated at £10,000 - £12,000, this is the only recorded multiple of this very rare and important variety. 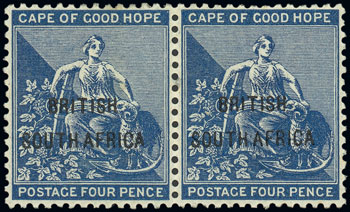 Another example of the Arms Issues on offer is lot 32, a £20 yellow-bistre marginal horizontal strip of four from the foot of the sheet. Printed in fresh bright colour, this rare multiple is estimated £15,000 - £20,000.

The main section of the auction is devoted to the Admiral issue, an outstanding selection with essays, colour trials and issued stamps with a range of multiples, many that have not been seen since the Gibbs sale of 1988. 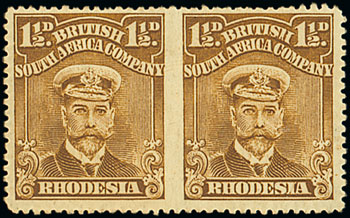 The star of the Rhodesia Admiral issues is lot 309, a 1-/ black and dull blue marginal block of four from the foot of the sheet with full imprint. The vertical pairs variety imperforate between is estimated £20,000 - £25,000. 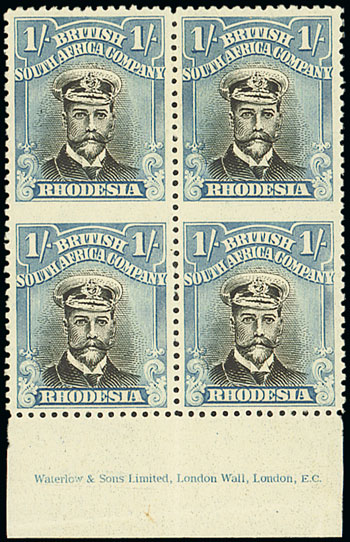 Spink London will be holding two more philatelic sales on the following two days; The "Garrison" Collection of New Guinea "G.R.I." Surcharges on June 18th and The "Lionheart" Collection of Great Britain and British Empire - Part III on June 19th.