Today, May 30th, Spink London achieved a number of results well over estimate in an auction of 'Bonds & Share Certificates of the World'.

The sale offered a wide selection of 700 rare lots from across the globe, many of which have not been seen on the market for over eighteen years.

Highlights included lot 378, a rare certificate for one share in the voyage of the ships 'Success 'and 'Speedwell' to the South Seas, both in charge of Captain John Clipperton (English pirate and Privateer).

Dated 18th of June 1720, the share features signatures of Alexander Strachan, E. Hughes, Andrew Drummond and R. Winder who act as managers and directors of the expedition.

With only two known of its type, the certificate gained a lot of attention from buyers to realise a price of £4,200. 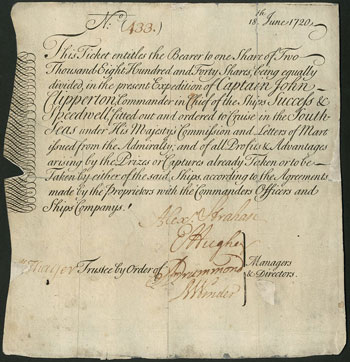 The impressive document was made out for repayment and payments to John Durand for supporting Armed Forces in the 'ceded' islands of Tobago and Dominica.

Dated April 1776, the document is in extremely fine condition and is signed by King George III, Lord North (Prime Minister), Lord Onslow (a Minister of the Treasury) and C.W. Cornwall (Treasury). 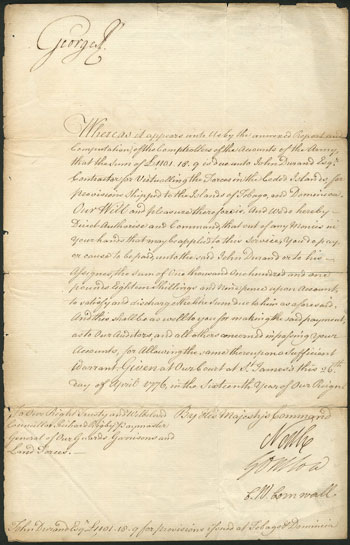 Next week, June 7th, Spink will hold the next sale of Bonds and Shares in Lugano, offering more unique and interesting items that will excite buyers and collectors alike.