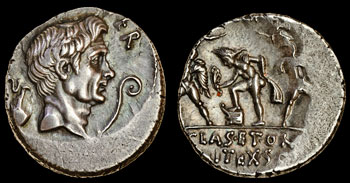 Silver Denarius issued by Sextus Pompey, the Commander of the Roman fleet in the Western Mediterranean in the First Century B.C.

After falling out with Octavian and Mark Antony he retreated to Sicily and turned to piracy. With a strong fleet, Pompey was for a time unstoppable, raiding and pillaging up and down the coast of Italy at will. Eventually he was defeated, and was executed on Mark Antony's orders in 35 B.C.

The coin will be offered at auction by Spink in London on 26 June 2014. It is currently available for viewing in our London showroom.