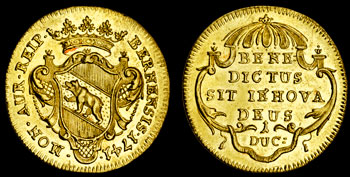 An extremely fine gold Ducat of 1741 from the Swiss city of Bern. The shield shows a bear, the symbol of the city. There is still a bear park in the centre of Bern, the setting for the Mary Plain children's books. The reverse shows the city's Latin motto, dating from the time of the great Religious Wars that followed the Reformation of the 16th century.

The coin will be offered at auction by Spink in London on 26 June 2014. It is currently available for viewing in our London showroom.