On May 21st 2014, Spink USA will offer the J. E. Safra 24c. Inverted Jenny, the most recognised and desired error in all of American philately, in a single lot auction.

This rare error from the J. E. Safra collection is the finest of the five recorded mint never hinged examples. This particular gem has been graded VF-XF 85 and SSV Catalogue value is $1,000,000 for an example graded VF 80.

Just one day after it was issued in May 1918, the stamp gained immediate attention from William T. Robey, who noticed its potential worth and purchased the entire error sheet of 100 from the New York Avenue Post Office in Washington D.C.

Within a week, Robey sold the sheet to the Philadelphia stamp collector Eugene Klein for $15,000, an impressive mark up on the initial $24 investment. Klein then resold the sheet to Colonel Green for $20,000.

Shortly thereafter, Green asked Klein to break the sheet up. A number of singles and position blocks were retained by Green whilst others were given to Klein to be resold to grace the collections of many prestigious philatelists.

The Inverted Jenny is in impeccable condition, featuring a beautifully rich and colourful print upon clean, crisp paper, complete with original gum.

Many copies from the original sheet have varying degrees of faults, some without original gum, making this example all the more important.

Previously setting a world record for a single US stamp, this particular specimen was sold at the Siegal 'Rarities of the World' auction in 1982 for $198,000. 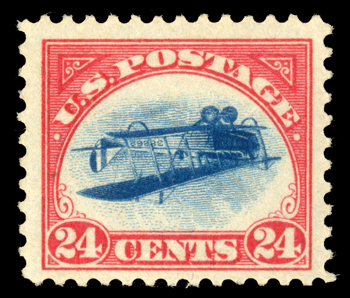