It is always exciting to see something new. For me, the biggest thrill of collecting is finding that mystery coin, puzzling over its attribution then finally placing it in its historical context. Following the success of the Rhodes Tibet auction, Spink Hong Kong  are offering another one-off collection of intriguing coins, this time from the pre-Islamic Silk Road states of Chach and Khwarezm (Choresm). 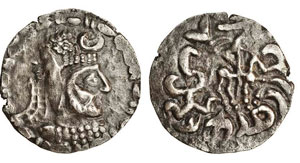 Casting your eyes over the coins in this article, I think you will agree that they represent two fascinating and  little-known series, for the most part new to numismatists. But where were ancient Chach and Khwarezm? And why are these coins only now coming to light? 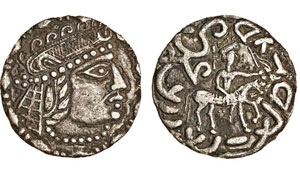 Chach is nowadays more familiar as the oasis around Tashkent, capital of Uzbekistan, while Khwarezm was situated further north-west on what was the Oxus River delta just south of the Aral Sea. Although the coins have been found in various archaeological excavations in these areas for many years, those published were generally of poor condition and were thoroughly research until Vainberg published her exposition on the early medieval numismatics of Khwarezm in 1977, and Muskaeva (following on from earlier works by Masson and Rtveladze) wrote on coin circulation in ancient Chach in 2004. However these and other papers were in Russian or other languages local to the area. The research only became accessible to Western numismatists within in the last ten years through the medium of Michael Federov's papers in the Journal of the Oriental Numismatist Society (JONS), followed by the appearance of V.Shagalov & A.Kuznetsov'sCatalogue of Coins of Chach III-VIII AD,in 2006, and the online publication of many new varieties on zeno.ru (Oriental Coin Database). 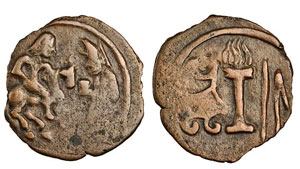 The silver coins of Khwarezm appear to be distant localized cousins of the Indo-Greek Tetradrachm; the reverse legends originally appeared in Greek around a horseman of Scythian form, while the obverse portrait took on a life of its own between the 2nd and the 8th centuries. The earlier types, one of which is offered here, are extremely rare. Later coins occasionally name early Arab governors of the Islamic period. 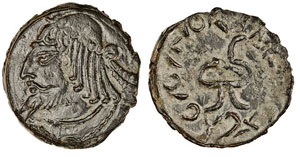 The coinage of Chach only commenced in the late 2nd or early 3rd century AD, and although we are told that silver, gold, copper and iron were mined locally, it was struck exclusively in copper. Early coins bear a portrait with similar traits to those on Hephthalite and Kushan coins, most notably the profile portrait and artificially elongated skull. In fact it is believed that the early rulers of Chach shared a common tribal Yeuchi ancestry with the Kushans. Following Turkic invasions in the 6th century the coinage took on a more varied appearance as each tribal area chose its own design. Lions, camels and horses are well represented, but more interesting are the [portraits. These exhibit a wide variety of ethnic traits and headgear that could only benefit from further investigation. Some feature a double portrait described as a 'royal couple', however the most intriguing must be that of the male bust that has wither a mask or Janus face of an elderly man facing in the opposite direction. The one thing that all coins of Chach and Khwarezm have in common is a symbol known as a Tamgha. This is often the sole reverse symbol on coins of Chach, and is thought to represent he principality of the issuer. This is usually accompanied by a Sogdian legend indication the title and sometimes the name of the ruler, together with the region of issue, although the precise translation of many of these has yet to be agreed. 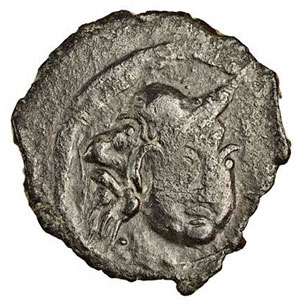 This is unquestionably the most comprehensive collection of Chach coins ever offered at auction, and they are in exceptional condition for their type, so much so that many of them were used as plate coins in the Shagalov & Kuznetsov catalogue.

If you are tempted to add something new to your collection you will find all the coins illustrated HERE With the improved format and scope of Spink Live it has never been easier to bid online worldwide.