Bank of England First Subscription for Auction at Spink

On the 28th of November, Spink will be holding an auction of Bonds and Share Certificates of the World, which will include among its 800 lots a pair of certificates relating to the first subscription to the Bank of England.

These are for the subscription of £500 made by Sir Ralph Radcliffe (1633-1720) for his wife. The first is dated June 1694 when the Government were raising funds to create the bank, and the second is dated September 1694, just after the Bank had been formed, for the second payment of £125. The documents are very fine and extremely rare, and are expected to fetch between £15,000 and £20,000. 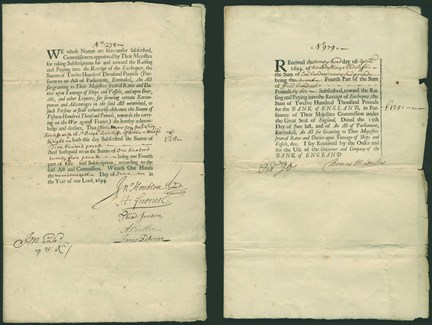 The five signatories on the larger receipt - Sir John Houblon, Sir Henry Furnese, Sir Theodore Janssen, Abraham Houblon and Sir James Bateman signed in their capacities as Commissioners appointed under the Great Seal of England to take the subscriptions, but their greater significance is their subsequent election as directors. The first Board contained three Houblon brothers, merchants whose grandfather had fled France at the time of the Alva persecutions. Sir John became the Bank's first Governor, and the present Threadneedle St. building includes the site of his one-time house. Furnese was a trader in point lace. Janssen and Bateman (a later Bank Governor), both immigrants from the Continent, later made the mistake of deserting the Bank in favour of the South Sea Company. Bateman was the first sub Governor there but died before the years of the bubble: Janssen, despite his reputation for honesty remained to be fined over £200,000. Maddocks, who signs the smaller receipt was at that time the junior of the initial cashers, although he was soon to became Chief Cashier and his autograph is much sought after as a signatory on the first banknotes.

The £1.2m. capital raised was to be lent wholly to the Government at 8%p.a, the interest to be financed by levying a duty "upon the Tunnage of ships and vessels" and thus the Bank became the Tunnage bank to its detractors. In return for the loan, the Bank was to be granted a charter and the right to issue £1.2m. of banknotes, secured only on that loan. The Chancellor of the Exchequer, fearful of failure, provided for a further £300,000 to be raised in the form of annuities, which is why the Act refers to £1.5m. He need not have worried. The subscription for the Bank taken at the Mercers' Chapel, filled in 12 days. It had opened on June 21 1694, the Queen applying for £10,000.

The first Radcliffe subscription receipt here illustrated is dated the following day. The Charter, and therefore the actual commencement of the Bank, was not sealed until 27th July: It is unlikely that another opportunity will occur to acquire a document dated at the very dawn of the Bank.

Speaking of the sale, Bonds & Shares specialist Mike Veissid said "this pair of documents are extremely important and have not been seen on the market during my 40 years in the business".