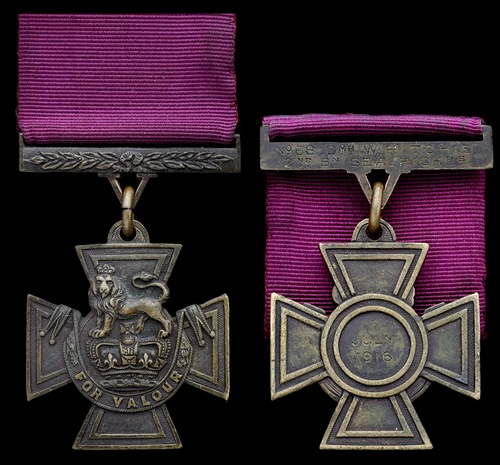 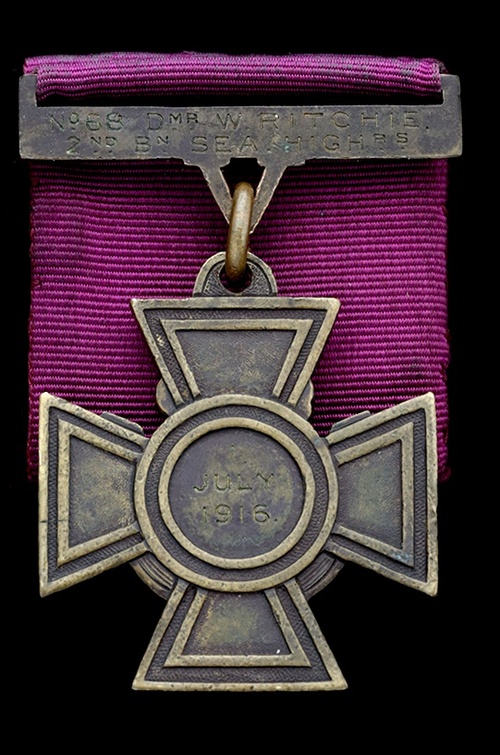 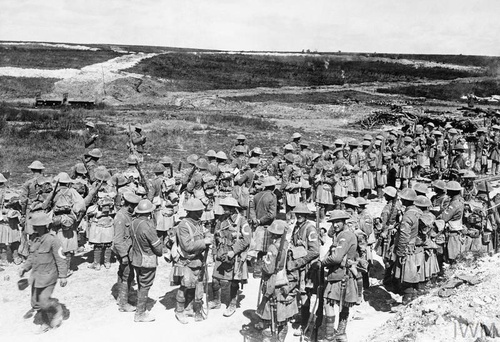 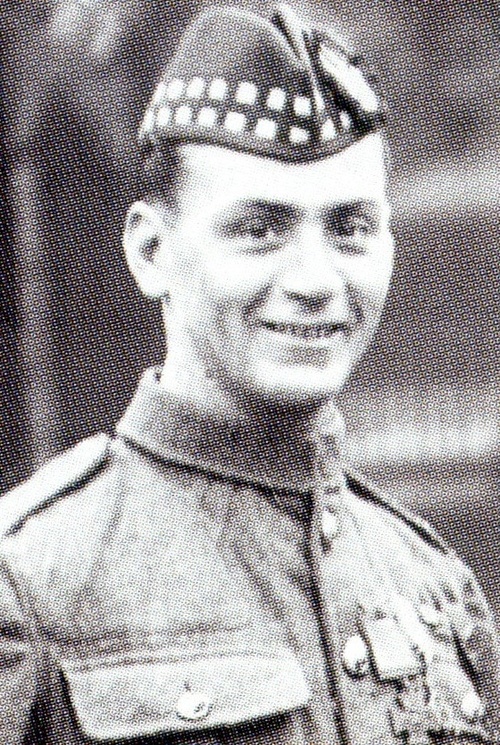 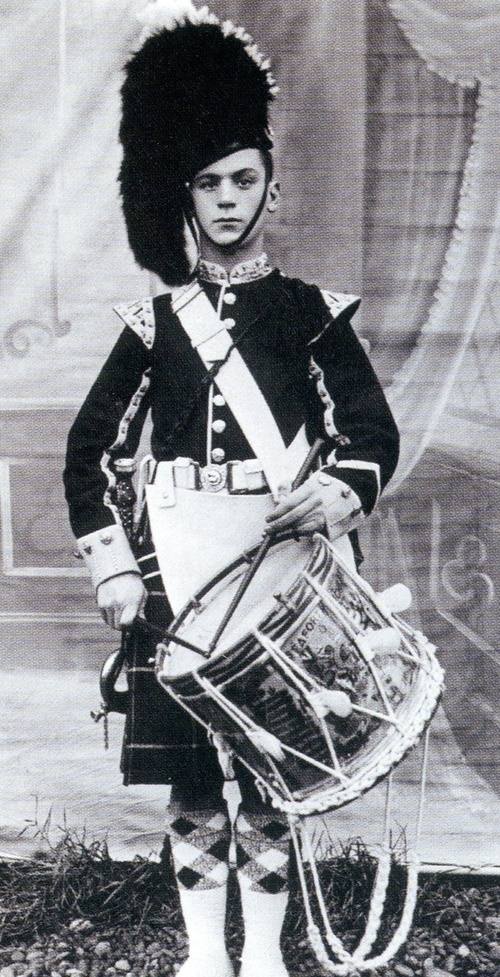 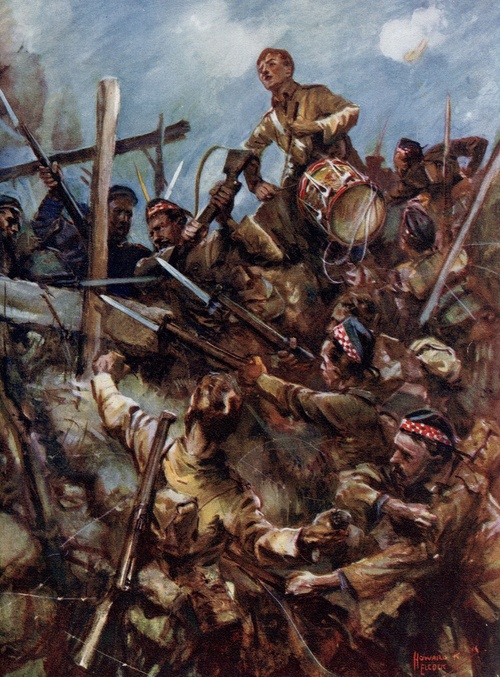 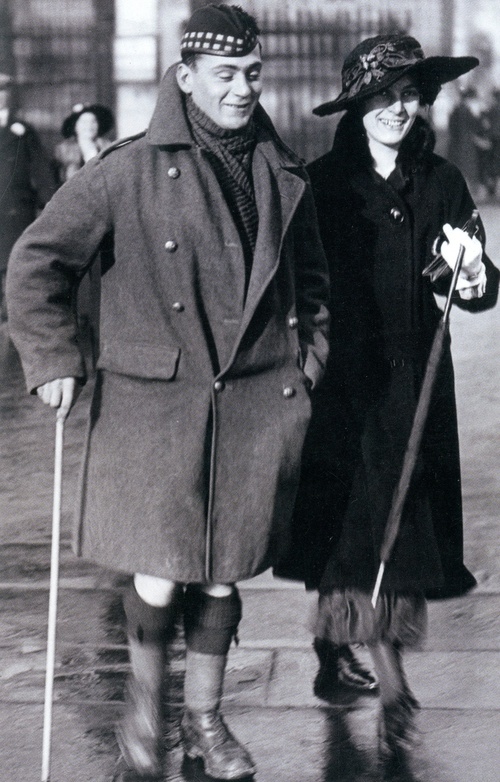 (x) The exceptional and important 'First Day of the Battle of the Somme' V.C. group of ten awarded to Drummer W. Ritchie, 2nd Battalion Seaforth Highlanders, who was awarded his Victoria Cross as the 'Bugler of Beaumont Hamel' on 1 July 1916 when, under a hail of machine-gun and bomb attacks, he selflessly mounted the parapet of an enemy trench and continually sounded the 'Charge' on his bugle to rally his comrades and inspire them into action on a day which saw a third of those same comrades fail to answer the Roll Call by the close of play

Ritchie was a career soldier who joined the Scottish Rifles whilst underage in 1908; he was no stranger to the crucible of action, having landed in France in August 1914 and had shared in the Battle for Mons - by the end of the Great War he had been wounded in action on no less than five occasions and also added the Croix de Guerre to his laurels

This award is their sole award for 1 July 1916 and of the 18 Victoria Crosses earned by the Seaforth Highlanders and its antecedent units, the Victoria Cross of Drummer Ritchie is the only such award which does not reside in a Museum or the Lord Ashcroft Collection.

'For most conspicuous bravery and resource, when on his own initiative, he stood on the parapet of an enemy trench, and, under heavy machine-gun fire and bomb attacks, repeatedly sounded the "Charge" thereby rallying many men of various units who, having lost their leaders were wavering and beginning to retire. This action showed the highest type of courage and personal initiative. Throughout the day Drummer Ritchie carried messages over fire-swept ground, showing the greatest devotion to duty.'

Walter Ritchie was born on 27 March 1892 at 81 Hopefield Road, Glasgow, Scotland and found himself very much lost at school. Briefly apprenticed to a blacksmith, Ritchie was an 'ardent member' of the Episcopal Church at Troon. Not keen on his prospects as a civilian, he enlisted underage as a Drummer in the 8th Scottish Rifles, being transferred to the Seaforth Highlanders in August 1908, having reached the age of 16.

With the outbreak of the Great War, Ritchie remained a Drummer and was twenty-two years of age. The 2nd Battalion were stationed at Shorncliffe as part of the 10th Brigade of the 4th Division and swiftly moved to Harrow. He proceeded to France with his unit in this rank, landing at Boulogne on 23 August 1914. Ritchie was thrown into the crucible of Battle soon after at the Battle for Mons in October 1914, being wounded for the first time outside Armentieres. His unit was one of those which took part in the famed Christmas Truce of 1914.

In the following period, the 2nd Battalion shared in the actions of the Second Battle of Ypres during 1915 and thence toward the Somme region, often finding themselves at Mailly Maillet. Victoria Cross Heroes of World War One takes up the story of how his V.C. was won with the 4th Division during the attack on the Y Ravine and the southern sector of Beaumont Hamel:

'Ritchie's Battalion was to be in the second wave. It was part of a Division whose point of attack was near the village of Beaumont Hamel, including a German stronghold called Redan Ridge. Once the advance Brigade had secured its objectives, the 2nd Seaforths would surge forward, leapfrogging them and making deeper inroads into enemy territory. That, at least, was the plan. As the clock ticked past 9.00am - 90 minutes on from zero hour - Ritchie and the others made their move. There was no word that all was well up ahead, and the reason soon became apparent. They came under withering machine-gun and artillery fire from positions still very firmly in enemy hands.

The first wave had been cut to pieces, and the second threatened to be similarly decimated. As the day wore on some of the attackers did make it to the third German line, albeit at heavy cost. Officer casualties compounded the problem, an air of rudderlessness adding to the chaos and confusion. Some of those still on their feet were following a natural instinct to fall back.

It was at this point that Drummer Ritchie brought a semblance of calm and cohesion to the scene by the simple expedient of mounting an enemy parapet and sounding the charge repeatedly on his bugle. That clarion call, and the example set by a bugler who made himself a clear target in rallying the troops, had a steadying effect.'

The action itself had been a costly one for the Battalion. When the Roll Call was made - a scene which was captured by photographer Lieutenant Ernest Brooks (IWM Q 746) - in the afternoon of 1 July 1916, a third of their comrades did not answer. Captain J. Laurie (Adjutant) and Lieutenant-Colonel J. O. Hopkinson (C.O.) observed his actions; they formed half of the officers to survive the Battle - the other two that came out were walking wounded. The battle remains the most deadly single day of action in British military history.

What makes the award of further interest is the fact that the practice of carrying musical instruments into battle had long ceased, thus Ritchie felt himself fortunate not to be reprimanded for his actions. Instead, he went up to Buckingham Palace on 25 November 1916 to have his Victoria Cross presented by H.M. The King. Rather shy and retiring, upon his return to Glasgow the following evening, he was met by a group of friends keen to hear all about his exploits. He simply brushed them off stating:

'If you were to drop a Jack Johnson [a German 15cm artillery shell] at ma' feet, you couldna' mak' me speak!'

His Croix de Guerre was presented by Lieutenant-General Sir Aylmer Hunter-Weston in December 1916 during a well-earned period of leave. On 4 December he was also presented with a gold watch by the Lord Mayor of London at the Mansion House on behalf of the Worshipful Company of Musicians, who decided in 1914 that they would recognise all professional musicians that had received the Victoria Cross.

Ritchie was returned to the Trenches in 1917 and was wounded in action once again. The unit saw themselves present in the actions around Arras and at the Battle of Passchendaele and they shared in the Battle of the Lys and the fighting along the Hindenburg Line the following year. Ritchie, who continued to carry his bugle into action - by now he could not care less about regulations - closed out the Great War having been wounded on no less than five occasions (two of these from the effects of gas) whilst his 'mention' remains unconfirmed. He was also part of the one-hundred-strong party of living holders of the V.C. who formed the Guard of Honour at the interment of the Unknown Soldier at Westminster Abbey on 11 November 1920.

Transferred to the 1st Battalion at Belfast in 1921, Ritchie rose to Sergeant and thence Drum-Major, at which rank he retired in 1929. He latterly served as a Recruiting Officer in Glasgow, before serving with the Royal Army Ordnance Corps on the Home Front. He was discharged on account of ill health in 1941. Having been employed as a Hallkeeper with the Royal Arch Chapter, Queen Street, Edinburgh, Ritchie died at West Saville Terrace, Edinburgh on 17 March 1965.

On the centenary of his action, 1 July 2016, the City of Glasgow unveiled a paving stone in his honour. His grandson, also Walter, said:

'It is nice that my grandfather is being remembered with this paving stone all these years later.

It is befitting that it is so for a brave man, who was willing to sacrifice himself to rally his fellow soldiers in the face of enemy machine gun and cannon fire. My grandfather always felt he was just doing his duty.'

The act of his winning the Victoria Cross was depicted - with one of a handful of colour plates - in Deeds That Thrill the Empire by Howard K. Elcock. The artist, clearly taking his rank literally, showed Ritchie playing the drum rather than his trusty bugle. The famous bugle is on public display at the Queen's Own Highlanders Museum at Inverness.

Subject to 5% tax on Hammer Price in addition to 20% VAT on Buyer’s Premium. 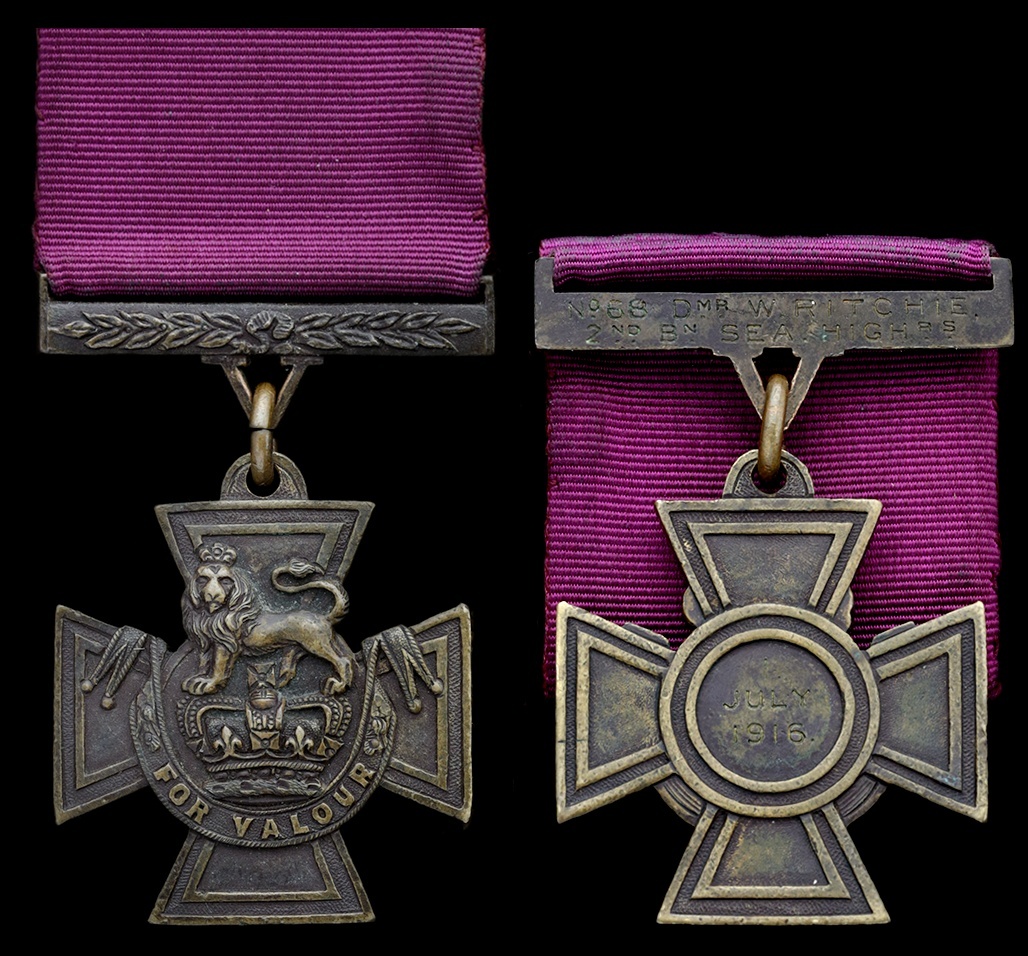 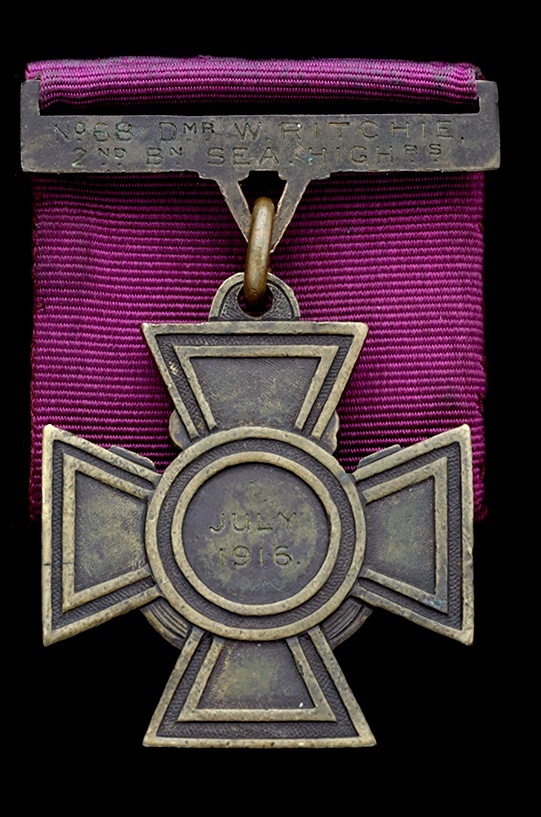 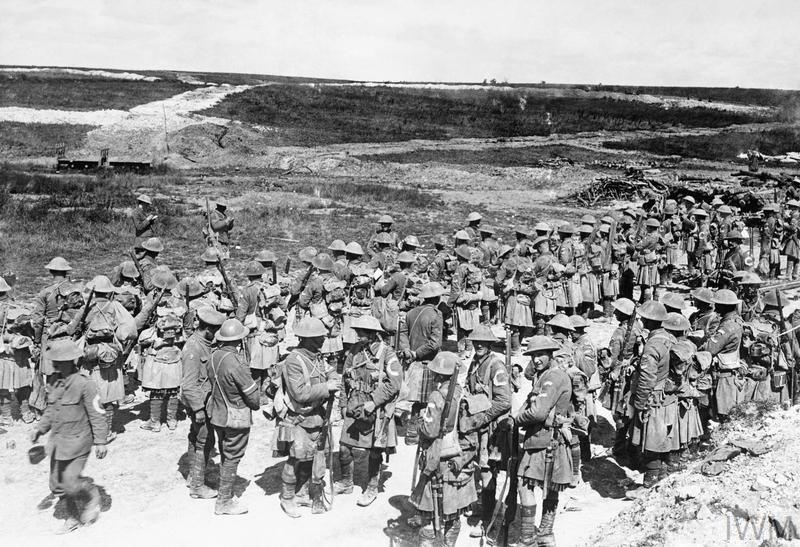 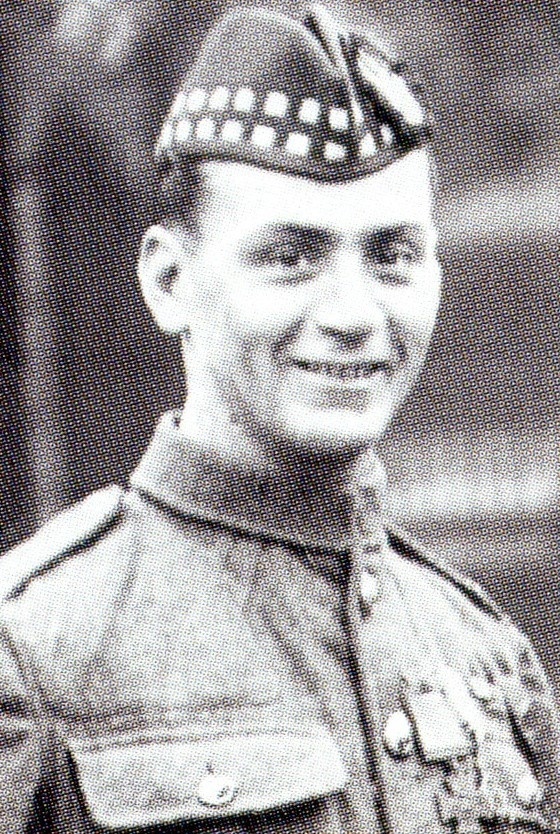 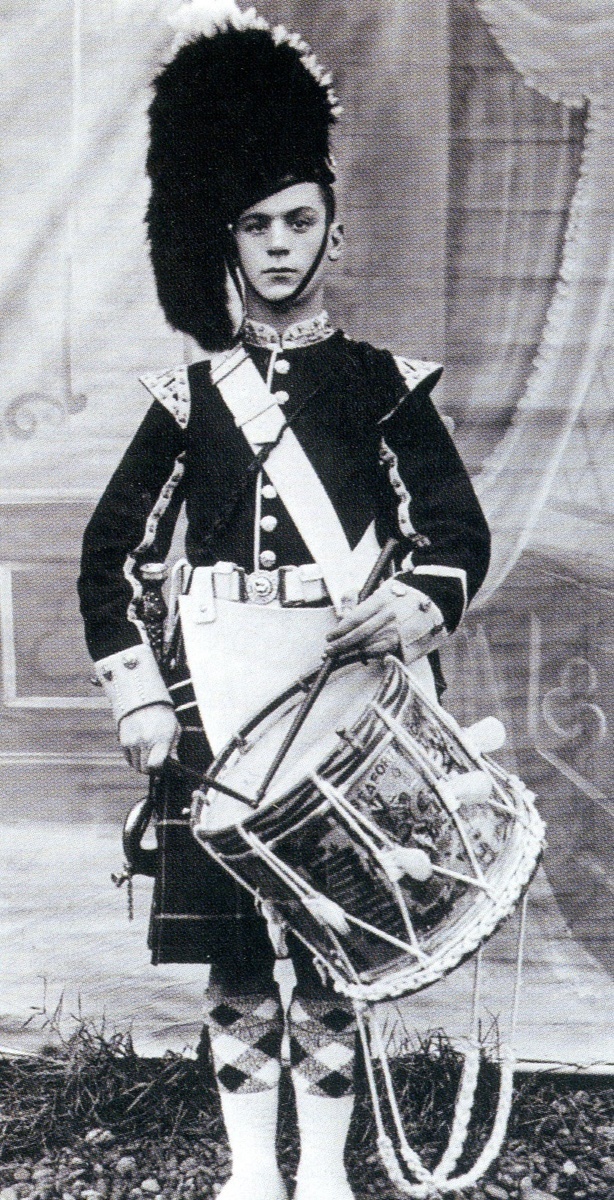 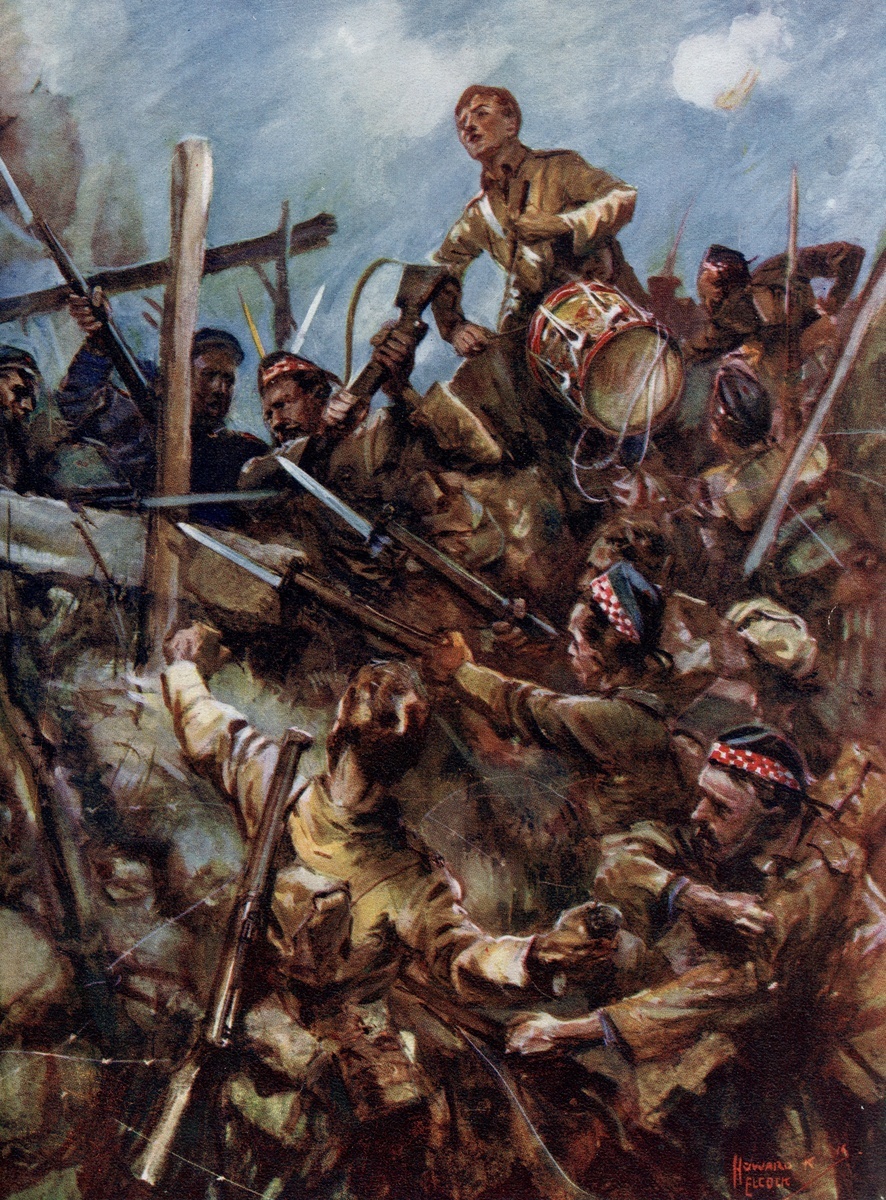 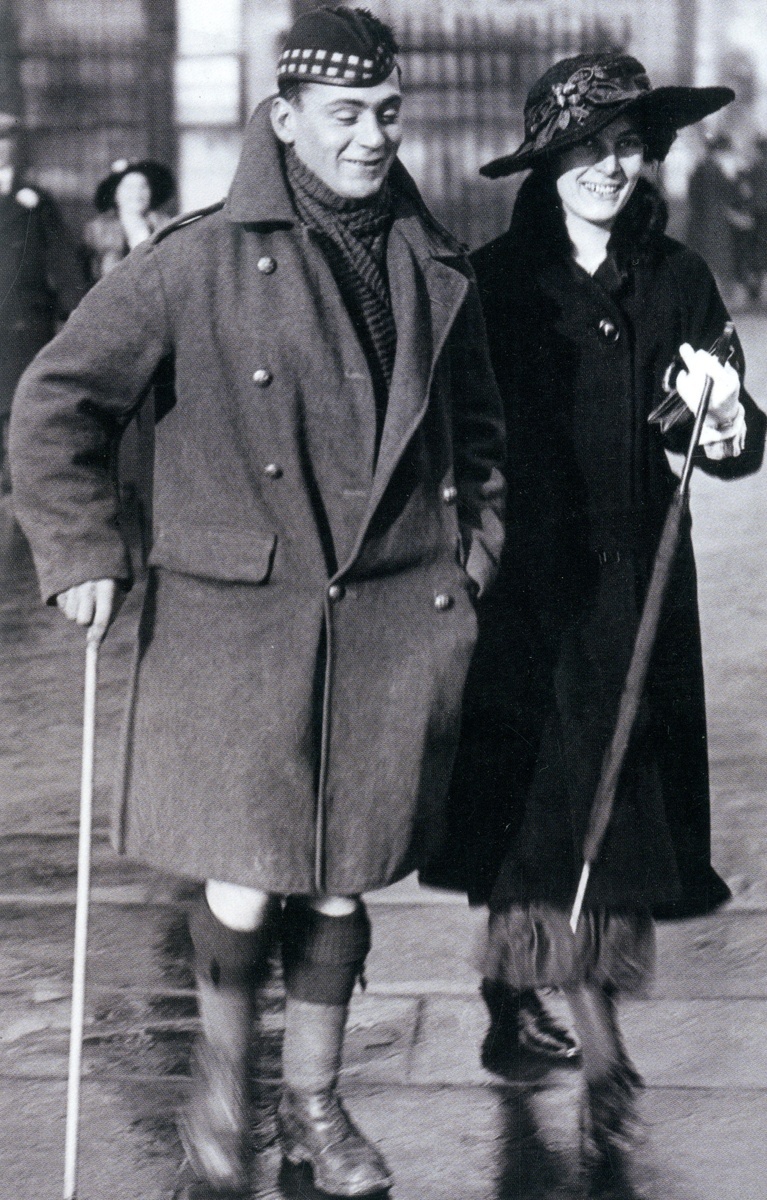