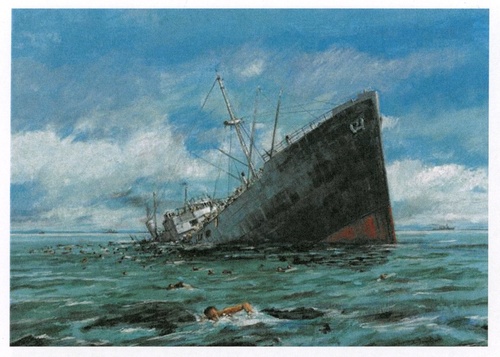 'I climbed out of the forward hold (No. 1 hold). I found the Japanese had abandoned the ship. S.Sgt. Ross, R.A.M.C., reported that he had a number of injured and sick mustered on deck from the holds aft. Between us we managed to render first aid and reassured disabled men. I was myself picked up after about four hours, together with S/Sgt. Ross and such ailing men as we had been able to keep with us. Throughout this period and subsequently as the medical orderly in charge at Kobe Camp, S/Sgt. Ross, R.A.M.C., displayed great devotion to duty and courage'

The report on the loss of the Lisbon Maru by Surgeon Lieutenant C. A. Jackson, Royal Navy

An extremely poignant Second World War group of three awarded to Acting Staff Sergeant H. J. G. Ross, Royal Army Medical Corps, having been captured at the Fall of Hong Kong, he received a 'mention' for his gallantry tending the wounded aboard the stricken Lisbon Maru after the ship had been torpedoed by the American submarine U.S.S. Grouper - tragically his award would be conferred posthumously for Ross would pass in the shocking conditions of Kobe Camp in May 1944

Henry James Gordon Ross was born on 6 May 1917 at London, the husband of Clara Ross of 293 Heath Road, Ipswich, England. He was captured at Hong Kong on 25 December 1941 whilst serving with the Royal Army Medical Corps.

The Lisbon Maru sailed from Hong Kong on 27 September 1942 enroute to Shanghai and labour camps on the Japanese coastline. She was armed and carried 1,816 British prisoners of war, 778 Japanese troops and a further guard of 25 men for the prisoners. There was nothing that identified her cargo as prisoners of war.

379 Royal Navy personnel were accommodated in No. 1 Hold at the front of the ship. A further 1,077 troops were crammed into No. 2 Hold, forward of the bridge, including the Senior British Officer on board, Lieutenant-Colonel H. W. M. Stewart, Commanding Officer of the 1st Battalion, Middlesex Regiment, whilst 380 men of the Royal Artillery were placed in the stern. Conditions were appalling, made worse by a lack of sanitation and the sea conditions. At the base of No. 2 Hold, Dennis Morley, now 98 - but then a 22 year old Private in the Royal Scots Regiment - recalls 'being showered by the diarrhoea of sick soldiers above him…swimming in excreta, virtually' (British P.O.W.'s sank with the Lisbon Maru - should it be raised? BBC News, July 2018, refers).

On 1 October 1942, the American submarine Grouper fired six torpedoes at the Lisbon Maru off Dongfushan in the Zhoushan Archipelago, to the south of Shanghai. Five of the unreliable Mark 14 'fish' either passed under the target or failed to detonate, but one exploded against the stern bringing the ship to a standstill. Grouper immediately came under retaliatory attack from enemy patrol boats and aircraft and departed the scene, enabling the Japanese troops aboard the Lisbon Maru to be taken off the stricken vessel. As they departed, they battened down the hatches, leaving their prisoners standing in the dark and running short of air to breathe.

Throughout the following night the prisoners remained trapped in the holds. Messages in morse code were rapped on the bulkheads between them, and gradually the stern began to fill with water. Something urgently needed to be done to prevent the men drowning or dying of asphyxiation. As the sun began to rise on the morning of 2 October 1942, the men felt the hull give 'a sudden drunken lurch', and a frantic escape effort began. Morley describes the scenes that he witnessed:

'Well, one chap, he was in the Middlesex Regiment, he was a butcher and the Japanese allowed him this knife, which he was able to put through the planks. He got through to the canvas, eventually - the whole lot. The canvas could be lifted out of the way and the planks moved which is how we got out.

A bit of panic started because everyone was trying to rush up to this ladder and everybody was fighting to get onto this ladder. Consequently, you're getting so far up and falling down into the bottom of this hold - until this officer, Captain Cuthbertson of the Royal Scots, stopped the panic and got them to quieten down.'

This account is challenged by another which states that Lieutenant Howell managed to cut his way out of the hold using a bread knife smuggled aboard ship, but whatever the case, the first POW's to reach the deck were fired at by a few remaining Japanese guards who were quickly despatched. Then the British began to slide off the side of the ship into the water in an attempt to get away from the vessel, but they were targeted by machine guns from the Japanese who were watching on. It was only when Chinese fishermen started coming to the aid of the soldiers and sailors in the water that the firing ceased and the Japanese began to gather them up as well. At the stern of the ship, men of the Royal Artillery continued to hoist themselves up a ladder which eventually broke; in one of the most harrowing scenes of the tragedy, the survivors in the water listened with horror as dozens of trapped men of the Royal Artillery went down with the ship singing 'It's a long way to Tipperary'.

In total, 828 Prisoners of War died either aboard ship or in the waters around the vessel (The Sinking of the Lisbon Maru, Britain's Forgotten Wartime Tragedy, refers). Especially tragic was the fact that the ship had been sunk by an American submarine, whose crew were completely unaware that there were Allies aboard until they picked up a radio signal several days later. Of the survivors, only 748 returned to Britain alive following the cessation of hostilities.

Having saved the lives and eased the suffering of many at Kobe Camp, Ross died behind the wire on 15 May 1944. According to Captain Martin Weedon, 1st Battalion, Middlesex Regiment:

'He died of beri-beri on top of a stomach ulcer. Very sad as he has done more than anyone for the sick. I owe my life to him when I had diphtheria.'

Ross is buried at the Yokohama War Cemetery in Japan, where his memorial plaque bears the inscription, 'He thought of others, never himself, gave his life helping his comrades.' He left effects totalling £321 16s. 1d. to his wife; sold with copied research and P.O.W. records. 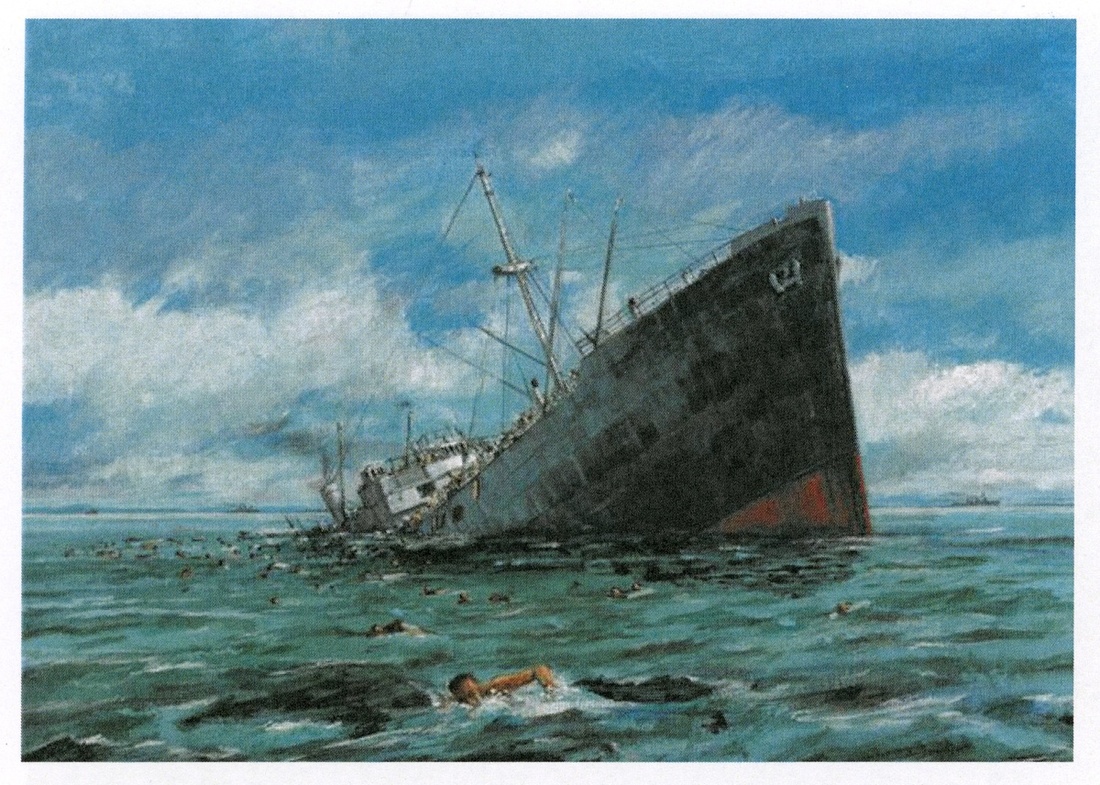